"On behalf of the Energy & Utility Skills Group, I'd like to say and BIG thank you to you and the cast for your efforts in delivering such an entertaining evening at our staff event. I think it's fair to say from the level of staff participation and enthusiasm that everyone thoroughly enjoyed the Murder Mystery dinner. I look forward to working with you again in the future."
Laura Gilbert, HR Adviser 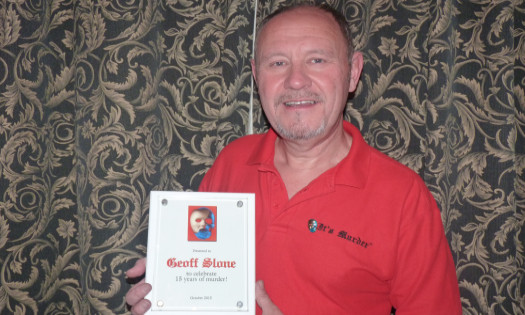 You will not be subjected to 'Death by PowerPoint'!

It's Murder will facilitate these events which are very very cost effective and are not affected by the weather or location.

Delegates will work in teams to develop their skills by planning, presenting and solving mini-murder mysteries. You will participate fully, demonstrate leadership qualities but at the same time be able to work as a team, making and taking direction in order to reach your aims and fulfil your objectives.

Whilst the sessions are fun to participate in, all delegates will experience personal development, delegation, time and project management and financial awareness.

"Very inclusive. Lots of opportunity to make own interpretation and add individual style to the roles."
R Tiffany, ASDA, September 2015.

"Good to have the facilitators to give it structure."
ASDA, September 2015.

"Better than expected - not usually my thing but very enjoyable! Made everyone take part and communicate - was very funny!"
Charles H, ASDA, September 2015.

"The day was a fun enjoyable time. The teams worked well together and it was great to see the other teams' performances."

"Had a fantastic day which went really well. Some of the team members were apprehensive before the day but all joined in and had a good time."

"I liked the humour and the relaxed atmosphere. I enjoyed the opportunity to be creative."

"Q: What did you like about the day? A: Getting to grips with my confidence, especially being brought out of my comfort zone."

"Thanks to Jack (the facilitator) for making this a fantastic experience and the confidence to do this again."

"I enjoyed it as I'm not very confident and it gave me the opportunity to express my ideas."

"I was apprehensive about the role play acting, but as soon as we played around with the props it broke the ice."

"Everyone faced their fears and got involved. This made it an enjoyable experience."

"Fun and achieved something that I wouldn't normally do."

"Amusing, done in good humour, achieving outside of comfort zone."

"Was really excited to be doing this - something different. Gave me a chance to work on my speech (I have a stammer!)"

"Used a lot of work-based skills without realising it."

A small selection of our satisfied and regular clientele